"The only Mercy is a sharp blade and a strong arm."

A half-elf, who is nothing short of comely. Although, the deep scars that run from his right temple to his left eye make him a bit less…approachable. This foreboding look is accented by his eyes, a gift from his Holy Father Kord. When looking into Thalion’s eyes an enemy will see nothing but an endless sea of dark blue, and his own inevitable doom. Upon proving himself, Thalion was given a gift by his new companion Quinn, a tattoo of a lone warrior before a field of enemies. This vivid picture is displayed on his back.

Weapons were not, strictly speaking, allowed during the Festival of the Sun. The celebration of the summer solstice was a time of joy and dancing and singing in praise of Pelor. And in his honor, no sword could be raised or bow strung. Any quarrel must be set aside. As a Protector of the Realm though, Thalion felt he could get away with the simple short sword hanging at his side. The comforting weight anchored him as the crowd of elves flowed around him and danced beneath the soaring expanse of the Temple of Giants.
Twelve trees made up the Temple—a gift from the Fey over a thousand years ago. Now they rose three-hundred feet in the air, their bark the color of old blood as though the beating heart of the Feywild had been exposed. The branches arching overhead held the sun. And between each massive trunk, cleverly woven vines told the story of the world; their flowers laced and luminous like the stained glass found in the cathedrals of Men.
Thalion stood below a depiction of the sea at night—pale hibiscus scattered across a clematis sky—remembering when he was younger and often imagined a Corsair ship sailing those waves of wisteria. Behind him, the singing and laughing of the Elves did not penetrate the solemn silence of the Giants towering above them, and to Thalion the scene was distant and muted as the flickerings of fish underwater, mouths opening and closing without sound.
“Envinyatar.”
The familiar voice drew Thalion from his thoughts as he turned to see Longshanks standing beside a dark-haired Elf in rich robes of gold. “May I introduce Saif, cleric of Pelor. He has recently returned from a survey of the Astral Seas” Longshanks said with a slight bow, “Saif, this is Envinyatar, our newest Protector.”
Thalion smiled politely and nodded in greeting. He hadn’t needed Longshanks to tell him that the newcomer was a cleric or that he’d been travelling. And judging from the partially healed scar under Saif’s right eye, the journey had not been uneventful. The cleric stood with a familiar tension, left hand lightly gripped, and Thalion didn’t need to see the calluses to know the hand was used to holding a quarterstaff. Something stirred in Thalion’s memory: a rumor, a name spoken in hushed tones: Starfire. He opened his mouth to ask what news Saif brought from outside the Realm, but the cleric spoke first.
“A half-human?”
Thalion stiffened at the low voice laced with contempt. His right hand tightened reflexively on his sword hilt. Saif looked from him to Longshanks as if waiting for the punch line, a sharp little smile on his face. “You’re not serious?” the cleric said, his laughter like ice thrown on a fire.
Once again all sound seemed sucked from the room. Thalion felt a nervous thrill amongst the crowd, saw embarrassed smiles flicked his way, but no one spoke. And in their eyes he saw the pity of an adult for a child who will never measure up. He looked to Longshanks, but the older elf’s gaze was focused somewhere over his head. Thalion knew he had to leave before he made the terrible faux pas of beheading a cleric of Pelor during the Festival of the Sun. “If you’ll excuse me,” he said and strode from the temple, blood pounding in his ears.

At the Garden of the Graves Thalion almost lost his soul…his being.

Not shortly after, Thalion ran from his faith. He was alone and stranded in a desert, and Kord came to him. Now he fights along side his brothers of The Faith. The Brotherhood of the Mountain. With his brother Shadow by his side, Thalion seeks to find Starfire, and stop him. 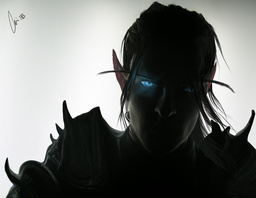