A human hybrid with barbarian and invoker traits.

For the past 10 years, Shadow has been the personal body guard of Kord. Trained from a young age, the original home and name of Shadow is unknown. When Kord’s generals trained Shadow they removed all connections he had with his past and started anew. Shadow is a war machine, built to protect his god and fight till his last breath. He is not without fault though. For the past two or three years, Shadow has begun asking questions about his past, however, no one in the heavens will answer his questions.

When Kord asked Shadow to return to the realm of the world, he could not refuse. To serve one’s god directly is the highest of honors. Shadow had proven himself in the wars between Kord and Incabulos by single handedly pushing back the advances of Incabulos. Some would say Kord thinks of Shadow as a son that never was.

Blessed by Kord, Shadow returned to the realm of mortals. When Starfire decided to harness a power that could rival the gods, Shadow was Kord’s most devastating weapon to stop him. Also, Shadow may be able to find something out about his past, for he does not remember anything from the age of 10 to his birth. His parents and siblings are a mystery, as well as his homeland. This quest may help in more ways than just aiding his god.

When arriving to the realm of mortals, Kord had restrained some of Shadow’s power. Shadow must not draw too much attention to himself or his party. While Shadow proved himself during war, Kord was still eager to see what he was capable of. Restraining his powers so that he may have a small challenge will test Shadow’s ability to adapt to situations, making him an even more formittable opponent.

On the realm of mortals, Shadow was greeted by the party of Thalian, Three, and Argawane. Three great warriors that the world had to offer. Finding this to be a suitable party, Shadow ventured off. Argawane was found to be a king, and split from the party to rule his kingdom. The remaining three dove deep into the Tomb of Horrors (a place known for nothing but death and destruction) hoping to find answers to the wear-abouts of Starfire. While in the tomb, Shadow developed a bond and friendship with his fellow companions. Finding common ground with the two. Though Three worships Haramathore, Shadow found it to be honorable that he was serving his god directly, a similar task given to Shadow. Thalian was also a follower of Kord, in which Shadow found most welcoming. The three came across a thief named Quinn, who was later revealed to be nothing more than a fellow adventurer, searching for more thrills, being as he was nearly 50 years old and had not been on an adventure in some time. The party welcomed Quinn with open arms and went along. The three were now four, and the four became known as The Gods’ Chosen.

However, while in the tomb, the life of Thalian was taken from the party. Devastated, Shadow said his prayers and sent Thalian off on a fairy, which was then ignited by a flame cast by Shadow’s crossbow. Attached to the bolt fired, was the ring that was on Thalian’s finger, a ring that matched Shadow’s ring of Kord. 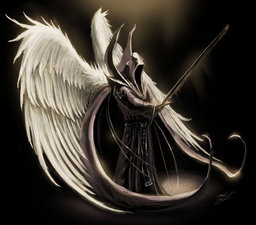